Dr. Mårild: Studies on early life infections and risk of celiac disease are inconsistent but have mostly been limited to retrospective designs, inpatient data, or insufficient statistical power.

In this nationwide cohort study children with a high infection frequency in the first 18 months of life were at a significantly increased risk of later celiac disease, with an increasing risk according to number of infections. We found broadly consistently increased relative risk estimates for celiac disease in relation to different infection subtypes and according to infection frequency in the first 6 months of life and at age 6-18 months. Our results remained largely unaffected by extensive adjustments for potential confounders, such as antibiotic treatment and infant feeding practices. 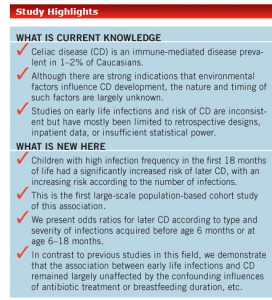 A surprising finding in this study is that we found similarly increased relative risk estimates for celiac disease in children exposed to repeated respiratory tract infections compared to repeated gastrointestinal infections.

In summary, this study is possibly the most comprehensive examination to date on the risk of pediatric celiac disease in relation to early life infections and our results provide better understanding to patients and practitioners on one significant aspect of the likely multi-factorial celiac disease etiology.

ACG: What do patients need to know?

Dr. Mårild: Celiac disease is an immune-mediated disease prevalent in 1-2% of Caucasians. Although there are indications that environmental factors other than gluten-exposure influence celiac disease development, little is known about the nature and timing of such factors. The results from this large-scale study suggest that increased early life infection frequency may be a potential trigger of pediatric celiac disease. Still, the study did only include children with clinically diagnosed celiac disease and, therefore, we cannot rule out that the association found may somewhat have been influenced by increased surveillance, including diagnostic work-up for celiac disease, among the children with high infection frequency.

ACG: What impact do you hope your research has on the future of healthcare, especially for GI patients?

Dr. Mårild:  Our results are in line with exciting immunological data suggesting that, although modest in magnitude, repeated infections may trigger celiac disease. Even though this finding may contain etiological clues for the development of celiac disease, non-causal explanations for this association due to surveillance bias (i.e. an increased detection of celiac disease in children suffering from high infection frequency) or reverse causation (i.e. the possibility that children with an undiagnosed celiac disease have an increased susceptibility to infections) cannot be excluded.

This study was confined to children, and we hope that future studies will elucidate whether prior infection frequency may also be associated with adult celiac disease

Dr. Mårild is a pediatrician and postdoctoral researcher at the Division of Epidemiology, Norwegian Institute of Public Health.