Colorectal Cancer Prevention in the Spotlight

The College applauds the efforts of its members and their colleagues to educate their patients and the public about of the power of colorectal cancer prevention during the observance of March Colorectal Cancer Awareness Month.  Each year, March is a focal point for community education and outreach to bring attention to the lifesaving potential of colorectal screening.

National Dress in Blue Day on March 4, 2016 highlighted colorectal cancer prevention with a sense of fun yet helped to convey important and serious screening messages and focus on survivorship.  The College received many photos from GI practices, hospitals and cancer centers around the country and was able to share them via Twitter (@AmCollegGastro) and the Facebook album (AmCollegeGastro)

The ACG staff donned blue in honor of “Dress in Blue Day” a national awareness day sponsored by the Colon Cancer Alliance.

Leaders from the College take to the airwaves the first week of March for a National Radio Tour with a focus on audiences living in colorectal cancer mortality “hotspots” in the southeastern United States.  Pictured (left) Dr. Caroll Koscheski, Hickory, NC one of the ACG Trustees, and (right) ACG President Dr. Kenneth DeVault, Mayo Clinic, Jacksonville, FL.  One of Dr. DeVault’s interviews with WJCT in Jacksonville was picked up on the station’s web site.

Oklahoma gastroenterologist, Dr. Tauseef Ali, worked with state officials to issue a proclamation in Oklahoma to honor March Colorectal Cancer Awareness Month.  The College is supporting the efforts of advocates at Fight Colorectal Cancer whose “Blue Star States” initiative aimed to have proclamations across the United States.  The March CRC observance got off to a good start on February 29, 2016 when the White House and President Obama issued a Presidential Proclamation.

Dr. Raj Vasudeva of Consultants in Gastroenterology in Columbia, SC and his wife Bhavna and partner Dr. March Seabrook organized an incredible “Colon Prep Party” with the University of South Carolina Center for Colon Cancer Research on Tuesday March 1st that was televised by WIST-TV. Media coverage of the event featured comments by Dr. Vasudeva on colorectal cancer and the 80% by 2018 goal.  Dr. March Seabrook was interviewed and the event generated lots of attention as five women all prepared for their colonoscopies together, including a local TV anchor. 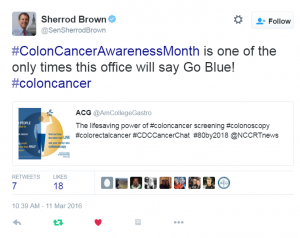 Senator Sherrod Brown (D-Ohio) re-tweeted one of ACG’s social media posts with a concession to “Go Blue!” for colorectal cancer awareness, not to be mistaken for the University of Michigan.  The Senator is clearly a loyal fan of The Ohio State University Buckeyes. 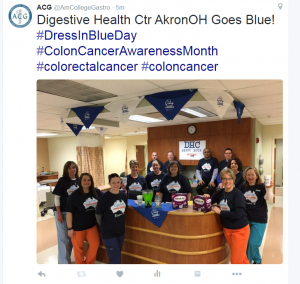 Costas Kefalas, MD, FACG, Vice Chair of the ACG Board of Governors and his team at the Digestive Health Center of Akron, OH 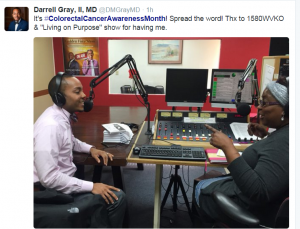 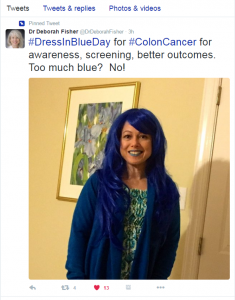 Dr. Deborah Fisher of Duke University proves that one can never wear too much blue on “Dress in Blue Day” 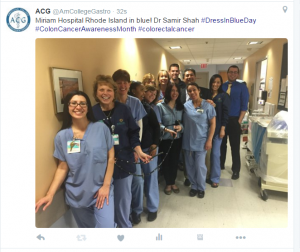 ACG Trustee, Dr. Samir Shah, and his team at Miriam Hospital in Rhode Island show off a colonoscope 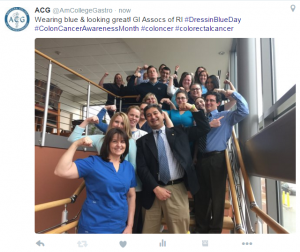 Here is Dr. Shah with his colleagues from GI Associates of Providence Rhode Island showing their strength in the fight against colorectal cancer. 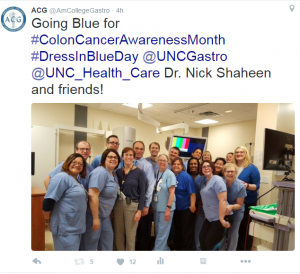 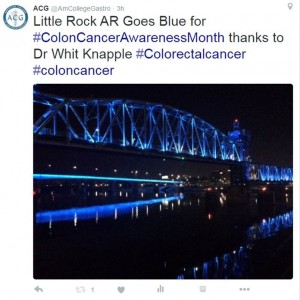 Bridges over the Arkansas River were illuminated in blue thanks to the efforts of Dr. Whitfield L. Knapple who serves as ACG’s Governor for Arkansas and chairs ACG’s National Affairs Committee.  Through a connection to a city official in Little Rock, Dr. Knapple helped light the bridges and the Union National Plaza building.  He coordinated his efforts with the local office of the American Cancer Society and advocates organizing a 5K run/walk for colorectal cancer awareness known as “Get Your Rear in Gear.” 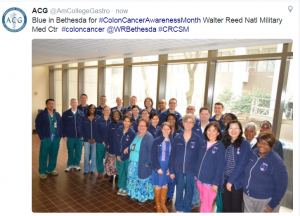 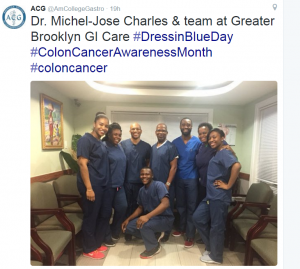 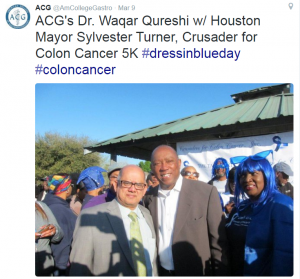 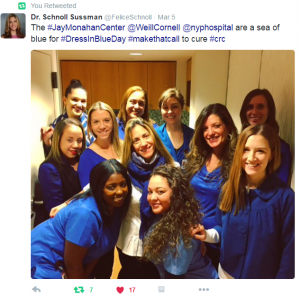 ACG Governor for Manhattan,Dr. Felice H. Schnoll-Sussman and colleagues at The Jay Monahan Center for Gastrointestinal Health at Weill-Cornell. 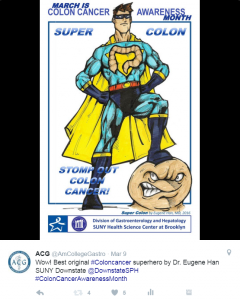 Dr. Eugene Han, a first year GI fellow-in-training at the VA Medical Center in Brooklyn, NY, is the creator of the Super Colon character, the courageous avenger who adorned flyers promoting a March CRC Month event.  With his creative vision, Dr. Han has filled a longstanding void: to beat colorectal cancer we need a hero! 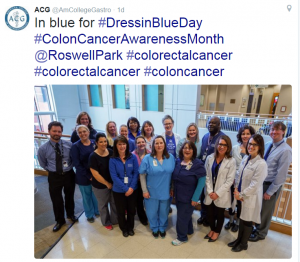 Roswell Park Cancer Institute dressed in blue on the front line in the fight against colorectal cancer. 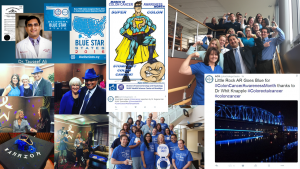 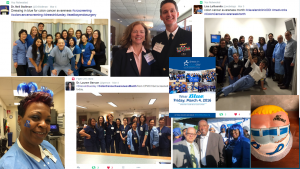 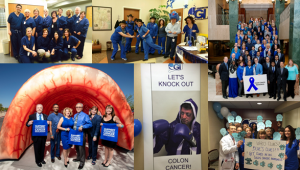 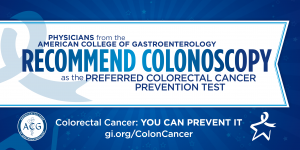 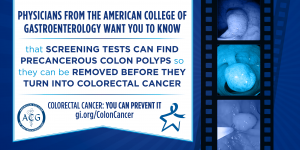 Check out these ACG colorectal awareness banners and download for your use. Learn more.

We will update and expand this blog, so please send your photos to mediaonly[at]gi.org