Lois Fink is an ostomy patient who was diagnosed with Crohn’s disease in the 1960s and had ostomy surgery more than 30 years ago.

How did it feel when you were diagnosed with Crohn’s disease?

LF: I had been sick for nearly two years with Crohn’s disease, but numerous doctors dismissed my severe abdominal pain, fevers, unrelenting diarrhea, alarming weight loss, lack of appetite, and delayed physical development as either growing pains or, worse, a “nervous child” and a “good candidate for colitis.” I had been discounted by so many physicians for so long that, upon hearing the words, “You have Crohn’s disease,” I felt a smug sense of satisfaction that quickly gave way to fear. This was 1966, and Crohn’s disease was not on the public health radar the way diabetes or heart disease were. I wanted to yell at the gastroenterologist, “There has been something physically wrong with me. I kept saying I was sick but no one would listen to me!” Fear quickly replaced my anger. I didn’t like the sound of this disease, which to my 17-year-old ears sounded more like a disease suitable for an old person, and I was a sophisticated teen, even if I looked like I was 11.

What was your biggest epiphany? What moment of life-defining change shaped you into the person you are today?

LF: “Why me?” I angrily hurled these words at my father when I was finally diagnosed with Crohn’s disease. I was still in the hospital, having gone through the humiliating barium enema study, swallowed chalky barium, been examined by multiple doctors, and discussed as if I was not present. I was struggling coming to terms with my diagnosis, my weight of 62 pounds, and not being allowed to return to school because my physical, emotional and psychological health were deemed too precarious. I doubted my father would have a credible answer for me. He was a military man who survived the initial invasion of Normandy on Omaha Beach, and relayed everything in military terms. His answer stunned me:

“I don’t know. Perhaps later in life you will meet someone and because of what you are going through now, you will know what to say and how to help.”

It would be years before I would fully understand the power of my father’s words. I had no way of knowing in that moment that my life’s goal was laid out for me, as a patient advocate for those struggling with inflammatory bowel disease (IBD) and, later, ostomy surgery. My father’s answer continues to inspire me and helps maintain a connection with him, even though his life ended in 1994.

What project or accomplishment do you consider the most significant in your career?

LF: After meeting a courageous teen with Crohn’s disease, who, when denied use of a retail store’s employee-only bathroom, turned her accident into a vehicle for change, and worked with her state representative to enact the first Restroom Access Act, known as Ally’s Law in Illinois, I wondered if I could do something similar in the state of Washington.

My state representative at the time responded enthusiastically to my email about taking steps to introduce a Restroom Access Act bill in the upcoming Washington state legislative session. I began by putting together a packet of information for the initial committee members and agreed to testify before House and Senate committee hearings. Following the bill’s progress through the legislative proceedings was exciting, suspenseful and nerve-racking at the same time. Successful legislation is rarely the result of one individual’s testimony, and the Restroom Access Bill for the State of Washington in 2009, was no exception. Many people stepped forward and shared their experiences in being denied access to a retail store’s employee-only bathroom during both House and Senate hearings over several months. Along the way, the bill experienced amendments, ratifications and stalling, until finally being signed by the Speaker of the House in April 2009.

On May 11, 2009, I was in Olympia, WA, along with many others who had volunteered their time and stories, watching then-Governor Christine Gregoire (D) sign the Washington State Restroom Access Bill into law, with an effective date of July 26, 2009. The experience was surreal. I had succeeded in working to get an important bill enacted into law! I had no way of knowing how meeting a courageous teen would ultimately motivate me to take action that ultimately helped so many individuals.

What have you learned about communicating with physicians that might help other people with chronic digestive disorders?

LF: Doctors are not mind readers. Patients must be willing to clearly and honestly communicate with their doctors. It is imperative we be totally forthright in sharing what our quality of life is like with either Crohn’s disease or ulcerative colitis, or any other digestive disorder. When we minimize our issues, we hurt not only ourselves, but our doctors as well. 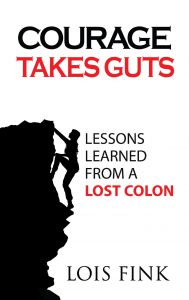 IBD carries with it a tremendous amount of embarrassment and shame, and it is important for both patient and doctor to be aware of this. It is not easy to talk about severe diarrhea that occurs multiple times during the day and night, or the fear of having an accident in public and hiding bowel incontinence from others. When a patient is a young woman and her doctor is male, this discussion can be even more difficult. But it is vitally important that we do discuss these issues.

When pharmacological management of IBD is no longer effective and ostomy surgery becomes necessary, how physicians discuss this surgery can make the difference between patients being open to ostomy surgery or being adamantly opposed. Fears and myths surround ostomy surgery, and physicians need to be cognizant of this. Contacting the local United Ostomy Associations of America support group and/or the certified wound, ostomy, continence nurse through the colorectal surgeon they work with can help their patient better adjust to ostomy surgery, and ease those very real fears about this life-saving, life-giving surgical procedure. Ostomy surgery will also be necessary when there is trauma to the gut or birth defects. I never saw my gastroenterologist as less than, or worse, that he had failed to treat my disease to enable me to be in remission, because ostomy surgery became necessary. Rather, he was giving me an alternative that would enable me to live my life for the first time, free from worrying about bowel incontinence, and the fear my body would betray me. He gave me an alternative that gave me back everything Crohn’s disease took away – a healthy, active life.

The doctor-patient relationship must be a two-way street. When we openly share, we show strength. When doctors are willing to engage in a conversation that goes beyond the usual “How would you rate your pain on a scale of 1 to 10”; “Is there any blood in your stool”; or “How many times a day do you have a bowel movement,” they show willingness to see us as whole human beings, not just the portion of the body that represents their specialty.

What are the most important lessons you’ve learned in life?

LF: Terrible things happen in life; that’s a fact. The important thing is how we deal with the situation and what we ultimately learn about ourselves. I learned that what I initially perceived as negative became a positive force in my life — when I became willing to change how I viewed my situation. When I became open, gratitude and opportunities for personal growth became possible.

Today, I am grateful for Crohn’s disease and ostomy surgery. They have given me the greatest gifts, along with the courage to trust “my gut,” even though half of them are gone! My journey of gratitude did not happen overnight, but rather gradually, over time. It started when my father said I might be able to help others because of what I was going through. Crohn’s disease and ostomy surgery have taken me down paths I never would have chosen to travel otherwise. They have allowed me to discover hidden talents. They helped me meet courageous individuals who have made a lasting impression on my life and inspired me to achieve goals I never would have thought of attempting.

Thirty years after ostomy surgery, I have made my peace with Crohn’s disease. I no longer resent the disease that relentlessly destroyed my colon and rectum, nor do I miss them. My stoma reaffirms that I am a gusty, strong survivor, a woman in my own right. I have learned to concentrate on what I can accomplish, change, and the importance of having friends accept me as I am.

In the middle of a crisis, it can be difficult to see what benefits a situation might ultimately bring us, what gifts we could receive if we are willing to see the incident in a different light. When we view a major life event to learn about ourselves, our perception shifts, and we gain a unique perspective that can lead to growth and gratitude.

I have learned that and so much more. And I’ll never have to go through another colonoscopy again!