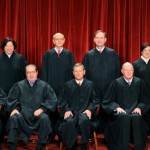 The Supreme Court ruled on June 25, that the Patient Protection and Affordable Care Act (ACA) insurance subsidies can go to residents of any state, marking a significant win for the Obama administration. The vote was 6-3.

As written, the ACA does allow subsidies to be provided in the 34 states that refused to set up their own insurance exchange, according to the justices. The ruling marks the ACA’s second major win before the Supreme Court since the law’s passage in 2010.

Whatever your thoughts are on the ACA, the opinion provides good historical context on the Court’s decision making process. Justice Scalia is known among constitutional law scholars for his gruff language and wit, which is again on display in the dissenting opinion.

Here are some of the most memorable quotes:

1.  “In a democracy, the power to make the law rests with those chosen by the people. Our role is more confined—“to say what the law is.” That is easier in some cases than in others. But in every case we must respect the role of the Legislature, and take care not to undo what it has done. A fair reading of legislation demands a fair understanding of the legislative plan. Congress passed the Affordable Care Act to improve health insurance markets, not to destroy them. If at all possible, we must interpret the Act in a way that is consistent with the former, and avoids the latter. Section 36B can fairly be read consistent with what we see as Congress’s plan, and that is the reading we adopt.”

2.  “Petitioners’ plain-meaning arguments are strong, but the Act’s context and structure compel the conclusion that Section 36B allows tax credits for insurance purchased on any Exchange created under the Act. Those credits are necessary for the Federal Exchanges to function like their State Exchange counterparts, and to avoid the type of calamitous result that Congress plainly meant to avoid.”

3.  “If the statutory language is plain, the Court must enforce it according to its terms. But oftentimes the meaning—or ambiguity—of certain words or phrases may only become evident when placed in context. So when deciding whether the language is plain, the Court must read the words “in their context and with a view to their place in the overall statutory scheme.” FDA v. Brown & Williamson Tobacco Corp., 529 U. S. 120, 133.

4.  “Here, the statutory scheme compels the Court to reject petitioners’ interpretation because it would destabilize the individual insurance market in any State with a Federal Exchange, and likely create the very “death spirals” that Congress designed the Act to avoid.”

5.    “And rigorous application of that canon does not seem a particularly useful guide to a fair construction of the Affordable Care Act, which contains more than a few examples of in artful drafting. The Court nevertheless must do its best, “bearing in mind the ‘fundamental canon of statutory construction that the words of a statute must be read in their context and with a view to their place in the overall statutory scheme.’ ” Utility Air Regulatory Group v. EPA, 573 U. S. ___, ___. Pp. 9–15.”

And from the dissenting opinion:

1.  “Having transformed two major parts of the law, the Court today has turned its attention to a third. The Act that Congress passed makes tax credits available only on an “Exchange established by the State.” This Court, however, concludes that this limitation would prevent the rest of the Act from working as well as hoped. So it rewrites the law to make tax credits available everywhere. We should start calling this law SCOTUScare.”

2.  “I wholeheartedly agree with the Court that sound interpretation requires paying attention to the whole law, not homing in on isolated words or even isolated sections. Context always matters. Let us not forget, however, why context matters: It is a tool for understanding the terms of the law, not an excuse for rewriting them. Any effort to understand rather than to rewrite a law must accept and apply the presumption that lawmakers use words in “their natural and ordinary signification.” Pensacola Telegraph Co. v. Western Union Telegraph Co., 96 U. S. 1, 12 (1878). Today’s interpretation is not merely unnatural; it is unheard of.”

4.  “The Court’s reading does not merely give “by the State” a duplicative effect; it causes the phrase to have no effect whatever. Making matters worse, the reader of the whole Act will come across a number of provisions beyond §36B that refer to the establishment of Exchanges by States. Adopting the Court’s interpretation means nullifying the term “by the State” not just once, but again and again throughout the Act. Consider for the moment only those parts of the Act that mention an “Exchange established by the State” in connection with tax credits…. It is bad enough for a court to cross out “by the State” once. But seven times?”

5.  “They made Congress, not this Court, responsible for both making laws and mending them. This Court holds only the judicial power—the power to pronounce the law as Congress has enacted it. We lack the prerogative to repair laws that do not work out in practice, just as the people lack the ability to throw us out of office if they dislike the solutions we concoct. We must always remember, therefore, that “[o]ur task is to apply the text, not to improve upon it.” Pavelic & LeFlore v. Marvel Entertainment Group, Div. of Cadence Industries Corp., 493 U. S. 120, 126 (1989).”

Health Reform and Practice Management Center
From articles to web-based educational programs, ACG provides you with guidance to improve your practice and our profession. This site also hosts an ongoing series of webinars prepared by the experts and fellow ACG colleagues on a variety of topics impacting the GI clinician. Click here to access these materials.