Dr. Williams is a Member of the ACG Committee on Minority Affairs and Cultural Diversity and the lead author of a recent CTG review article, “Colorectal Cancer in African Americans: An Update” which expands upon the Committee’s 2005 publication of ACG recommendations that African Americans begin colorectal cancer screening at age 45.

With the advent of aggressive screening for colorectal cancer (CRC), the incidence and mortality has significantly decreased in the last 10 years, the national goal of screening 80% of eligible adults by 2018 seems obtainable based on the current trajectory. However, disparities still exist within certain racial groups, particularly African Americans. The recent review published in Clinical and Translational Gastroenterology reminds us that while we have made progress, there still exists a significant gap between African Americans and their Caucasian counterparts in the United States. 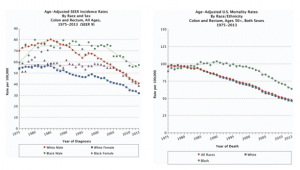 Observing the trends in the Surveillance, Epidemiology and End Results (SEER) database from 1975-2013, there is an obvious downward shift in incidence and mortality in both racial groups.  What is striking to the reader is the significant gap that continues to persist throughout the years.   This gap has been influential in guiding the College to recommend an earlier age of screening in African Americans.

There cannot be a discussion of earlier age of screening without addressing age-related differences, a topic that has not been extensively discussed in the current literature. A population-based analysis of the SEER registry found that patients diagnosed with colorectal cancer under the age of 50 were more likely to be AA or American Indian/Alaskan native.  Within the Clinical Outcomes Research Initiative (CORI) database African American men and women aged 50-54 years, 55-59 and 60-64 years had a higher prevalence of large polyps in comparison to white patients.   It should be noted that they did not find a difference in men and women younger than 50 years; however this may be due to a smaller sample size.  A well done study by Landsdorp-Vogelaar published in 2009 supports earlier screening, their MISCAN-colon micro simulation model demonstrated a decreased disparity in incidence and mortality if blacks were screening 6 years earlier than whites.

Barriers to Screening for African Americans

I believe we are all well aware that a key factor influencing these disparities is lower rates of screening among African Americans. Landsdorp-Vogelaar’s study found that 42% of the incidence disparity and 19% of the mortality disparity were due to lack of screening.  Patient barriers to screening include, lack of knowledge, lack of time, cost of the exam, fear, general lack of interest in screening, and low perceived risk of CRC, along with the well known lower socioeconomic status.   One intervention that has been quite successful in increasing rates of screening has been patient navigator programs. These programs have been instrumental increasing colorectal cancer screening in the general population. A few studies have investigated the use of patient navigators specifically in minority groups and demonstrated a higher adherence to screening.

How Physician Barriers Contribute to Healthcare Disparities in CRC

It is important to note that while patient barriers contribute to the continued healthcare disparities, there are also physician barriers. African American patients are less likely to get a recommendation for CRC screening.  This relationship persists even when adjusting for socioeconomic status, gender and physician visits per year.  Other physician barriers include, but are not limited to, lack of time, patient refusal, physician confusion about which test to recommend and lack of knowledge.

While many general physicians are aware of the fact that African Americans have a lower colorectal cancer survival – which in part has to do with lack of access to care –  there are also studies reporting lower rates of referral for surgical and oncological services in black patients. This is supported by many reports of lower rates of surgery, radiation and chemotherapy in black patients with advanced colorectal cancer. Whether this is a factor of the physician or the patient needs to be investigated further.

“Closing the disparity gap can be done with programs aimed at increasing screening rates in minority communities.” — Dr. Renee Williams

Closing the disparity gap can be done with programs aimed at increasing screening rates in minority communities.  Current evidence exists for this approach in the Delaware Cancer Advisory Council and the New York Colon Cancer Coalition (C5) initiative.  Both states enacted programs geared at increasing screening rates in underserved communities utilizing a variety of resources such as patient navigators, funding for the uninsured and instituting culturally sensitive outreach programs. Both initiatives were successful in decreasing the screening gap.  In Delaware the CRC mortality rate almost equalized amongst white and black patients.  New York increased screening rates among black patients to 70% by 2012 and significantly closed the gap in screening rates across the different racial groups.

The American College of Gastroenterology has always had a strong commitment to screening for colorectal cancer and has recommended earlier screening in African Americans since 2005. While this recommendation has not been adopted by the United States Preventive Services Task Force or the American Cancer Society, the College has never wavered in its recommendation as a part of ACG’s commitment to reducing the health disparities noted in this high-risk group.   The ACG Committee on Minority Affairs and Cultural Diversity is committed to advancing awareness of this issue and will continue to emphasize the important facts supporting the ACG’s recommendation for African Americans to begin colorectal cancer screening at age 45 years.  To improve the current colorectal cancer incidence and mortality racial disparities, will require vigilance in regards to promoting screening amongst our underserved patients.

Read the review by Dr. Williams and her colleagues from the ACG Committee on Minority Affairs and Cultural Diversity