Medicare Trustees Report Released: why is this important for ACG members?

On Tuesday, the 2018 Annual Report of the Boards of Trustees of the Federal Hospital Insurance and Federal Supplementary Medical Insurance Trust Funds was released, with the major headline being that Medicare’s hospital trust fund is expected to run out of money by 2026.  This is 3 years earlier than previously projected.  According to the report, the more pessimistic outlook is largely due to reduced revenues from payroll and Social Security taxes and higher payments than expected to hospitals and private Medicare plans last year.  Social Security faces depletion in 2034. That estimate is identical to last year’s projection.

What does this mean?

The Medicare trust fund (the fund which pays for Part A inpatient hospital services) is projected to run out of excess funds by 2026.  Medicare Part B and other parts of the Medicare Program covering physician visits, outpatient services, and prescription drugs, are funded primarily with general fund revenues.  Thus, these services are fortunately not included in the dire news regarding the trust fund’s future that is grabbing the media’s headlines.  However, this does not suggest that Medicare Part B is without financial issues.

So why is this report important to me as a gastroenterologist?

These reports also discuss and review Medicare Part B services, costs, and financial outlooks (more on this below).  Thus, the report allows ACG and public policy experts to potentially get a glimpse into the heads of those in charge of implementing Medicare payment policy for GI and health care services.

The Medicare program has two separate trust funds, the Hospital Insurance Trust Fund (HI) and the Supplementary Medical Insurance Trust Fund (SMI). HI, or Medicare Part A, helps pay for hospital stays, home health services following hospital stays, skilled nursing facilities, and hospice care.  SMI consists of Medicare Part B and Part D.  Part B helps pay for physician, outpatient hospital, home health, and other services for the aged and disabled who have voluntarily enrolled.  Part D provides drug insurance coverage on a voluntary basis for all beneficiaries and premium and cost-sharing subsidies for low-income enrollees. Medicare also has a Part C, which serves as an alternative to traditional Part A and Part B coverage.

The Social Security Act established the Medicare Board of Trustees to oversee the financial operations of the HI and SMI trust funds.  The Board has six members.  Four members serve by virtue of their positions in the Federal Government: the Secretary of the Treasury, who is the Managing Trustee; the Secretary of Labor; the Secretary of Health and Human Services; and the Commissioner of Social Security.  Two other members are public representatives whom the President appoints, and the Senate  confirms. These positions are currently vacant.  The Administrator of the Centers for Medicare & Medicaid Services (CMS) serves as Secretary of the Board.

What does the report say about Medicare Part B and Physician Payments?

Here is what the trustees had to say about Medicare Part B (which they refer to as “SMI,” or supplementary medical insurance):

The financial outlook for SMI is fundamentally different than for HI due to the statutory differences in the methods of financing for these two components of Medicare.  The Trustees project that both the Part B and Part D accounts of the SMI trust fund will remain in financial balance for all future years because beneficiary premiums and general revenue transfers are assumed to be set at a level to meet expected costs each year.  However, SMI costs are projected to increase significantly as a share of GDP over the next 75 years, from 2.1 percent to 4.0 percent under current law.  The projected Part B costs in this report are higher than those in the previous report due to recent legislation and higher Medicare Advantage spending.

The financial projections shown for the Medicare program in this report reflect substantial, but very uncertain, cost savings deriving from provisions of the ACA and MACRA that lower increases in Medicare payment rates to most categories of health care providers.  Without fundamental change in the current delivery system, these adjustments would probably not be viable indefinitely.

The Medicare Board Trustees on Part B Costs:

A critical issue for the SMI program is the impact of the rapid growth of SMI costs, which places steadily increasing demands on beneficiaries and taxpayers.

SMI costs are projected to continue to outpace growth in GDP but at a slower rate compared to the last 10 years. The relatively high growth during the period 2018-2027 is due to the continuing retirement of the baby boom generation and modest increases in cost trends. Growth rates are projected to decline during the 2028-2042 period primarily as a result of a deceleration in beneficiary population growth. For the last 50 years of the projection period, cost growth moderates further due to the continued deceleration in beneficiary population growth and lower health care cost growth rate assumptions.

On a per capita basis, SMI expenditure growth has substantially exceeded GDP growth historically, but it is projected to slow and increase at approximately the same rate as GDP after 2050 as a result of several legislatively specified payment updates, including physician prices.

The Report on the Future of the Medicare Beneficiary:

As SMI per capita benefits grow faster than average income or per capita GDP, the premiums and coinsurance amounts paid by beneficiaries represent a growing share of their total income.

Over time, the average Social Security benefit tends to increase at about the rate of growth in average earnings. Health care costs generally reflect increases in the earnings of health care professionals, growth in the utilization and intensity of services, and other medical cost inflation. [A]verage SMI benefits in 1970 were only about one-twelfth the level of average Social Security benefits but had grown to more than one-third by 2005. With the introduction of the Part D prescription drug benefit in 2006, this ratio grew to almost one-half. Under the intermediate projections, SMI benefits would continue increasing at a faster rate and would represent about three-fourths of the average Social Security retired-worker benefit in 2092.

Most beneficiaries have the option to enroll in private health insurance plans that contract with Medicare to provide Part A and Part B medical services.  The share of Medicare beneficiaries in such plans has risen rapidly in recent years; it reached 34.0 percent in 2017 from 12.8 percent in 2004.

Payments to Medicare Advantage plans are based on benchmarks that range from 95 to 115 percent of local fee-for-service Medicare costs, with bonus amounts payable for plans meeting high quality-of- care standards. As was the case last year, the Trustees project that the overall participation rate for private health plans will continue to increase—from almost 36 percent in 2018 to about 39 percent in 2027 and thereafter. 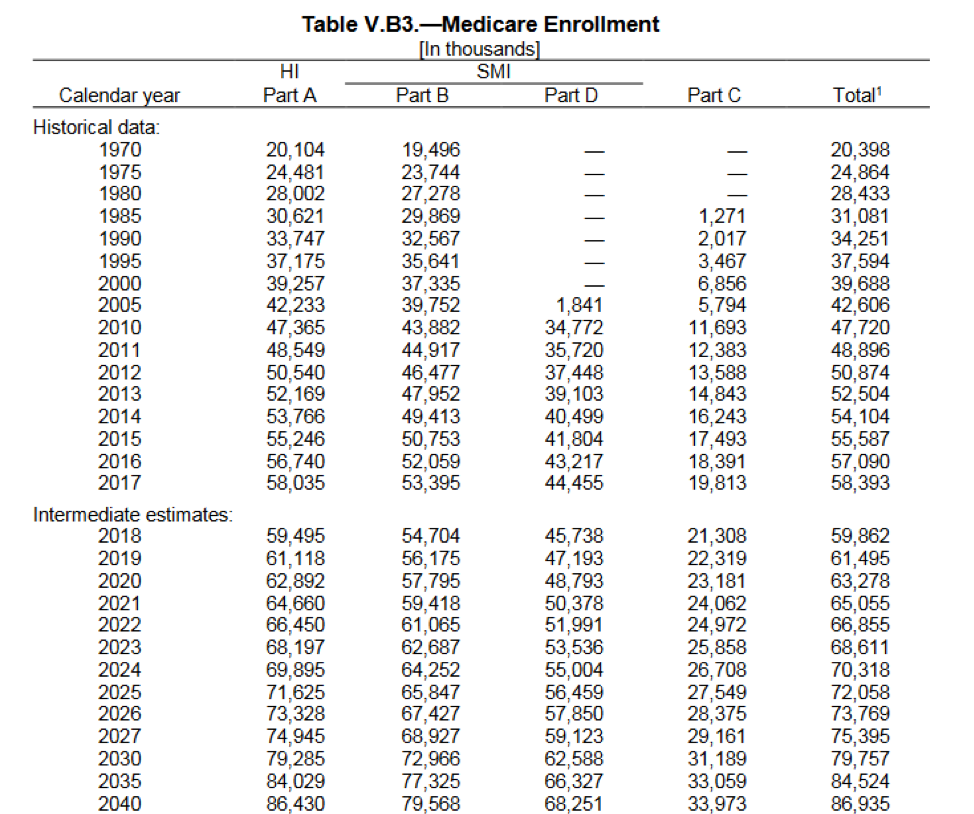 Click here to read the full report.  ACG will continue to use these data to help with our advocacy on your behalf, and on behalf of clinical GI.  The data help demonstrate ACG’s position that any additional cuts to physician services are unnecessary, unsustainable, and simply not the answer to maintaining Medicare Part B, especially as physician costs continue to rise over the next 10 years.  ACG will also continue to update membership on other important issues impacting your patients and practice.