As we begin March Colorectal Cancer Awareness Month, one of the most vital messages ACG will share is one that is not universally known—guidelines recommend that African Americans should begin screening for CRC at age 45, rather than age 50. Screening can spare the hardship and grief felt by people like Ms. Norma Davis-Atkins, who lost her husband, Len Atkins, to Stage IV colon cancer at age 48. Ms. Davis-Atkins was unaware of the recommendation prior to her husband’s passing.

“I don’t want anyone else to watch someone they love so dearly suffer what we have,” Ms. Davis-Atkins told ACG.

Ms. Davis-Atkins’ son, Davis Williams Atkins, was only 12 when his father passed. “All my husband wanted to see was our son grow up,” she said. “He will never have that chance.”

“The morning my dad died, I believed that my life was over. I never thought it would happen to my family, but it did,” wrote Davis William Atkins, now 17, in a reflection that will be published in the next issue of ACG MAGAZINE.

After struggling with how to honor her husband’s memory, Ms. Davis-Atkins decided to share her story in hopes that others will be motivated to get screened earlier.

Every opportunity to share these images is an opportunity to increase awareness in the community, reduce health disparities, and save lives. African Americans experience earlier onset and have the highest incidence and mortality from colon cancer, compared with other ethnic groups.

“CRC incidence rates were 25% higher and mortality rates were 50% higher in African Americans versus Caucasians between the years 2006–2010,” wrote Renee L. Williams, MD, FACG, of the New York University School of Medicine and Chair of ACG’s Minority Affairs and Cultural Diversity Committee, in a 2016 article published by Clinical & Translational Gastroenterology.

As we begin to tackle March CRC Awareness Month, help Ms. Davis-Atkins achieve her goal of advocating for earlier screening by saving and sharing on social media the awareness images featuring her family and her story. Sharing their story is a joint collaboration of ACG’s Public Relations and Minority Affairs and Cultural Diversity Committees. 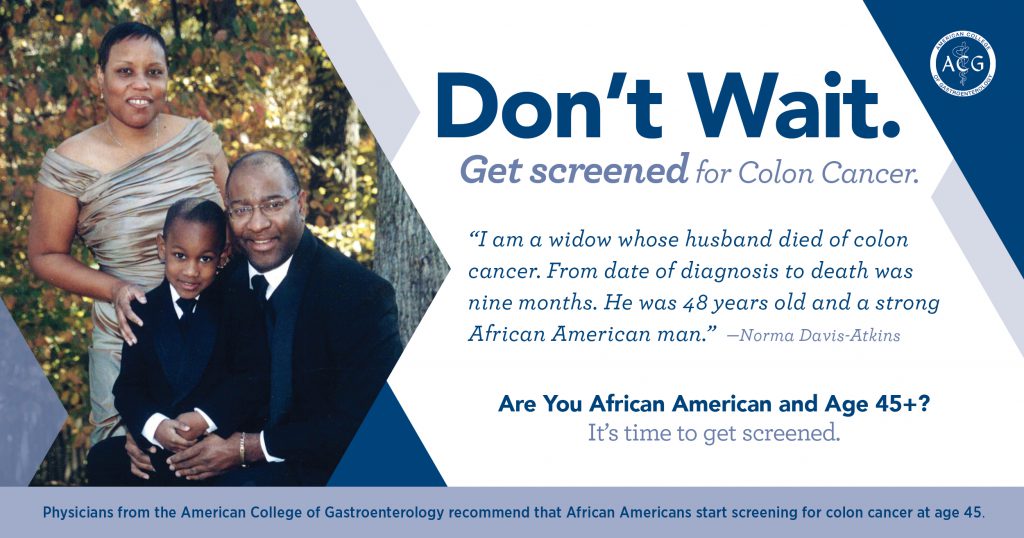